Disinformation in The Times Newspaper 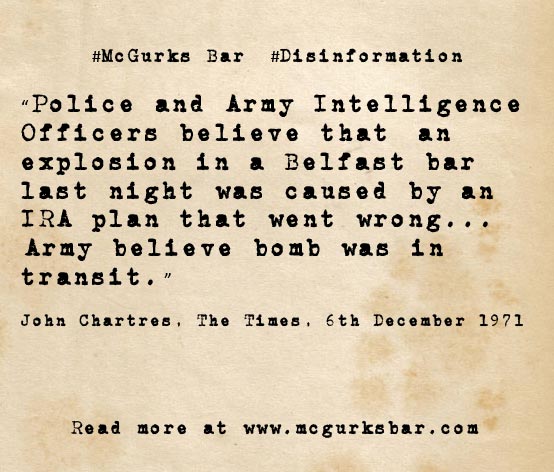 Disinformation in The Times newspaper, by John Chartres

John Chartres was the “independent witness” to the infamous Widgery Report in the aftermath of Bloody Sunday which sought to exonerate 1 Para for their murders on 30th January 1972.

Chartres testified that he witnessed nail bombs in the pockets of one of the teenage dead, Gerald Donaghey, although this does not preclude that they were planted there by the Paras who executed him.

That is not what was reported at the time though.

When Danny O’ Hagan was shot dead “in disputed circumstances” on 31 July 1971, witnesses in the New Lodge said he had not been involved in any activity whatsoever that would warrant his murder by state forces.

Chartres, of course, was not an independent witness to anything he saw on the streets of the North. He was also a Major in the British Territorial Army who was very good friends with none other than Hugh Mooney, Information Officer to the GOC in the Information Research Department.