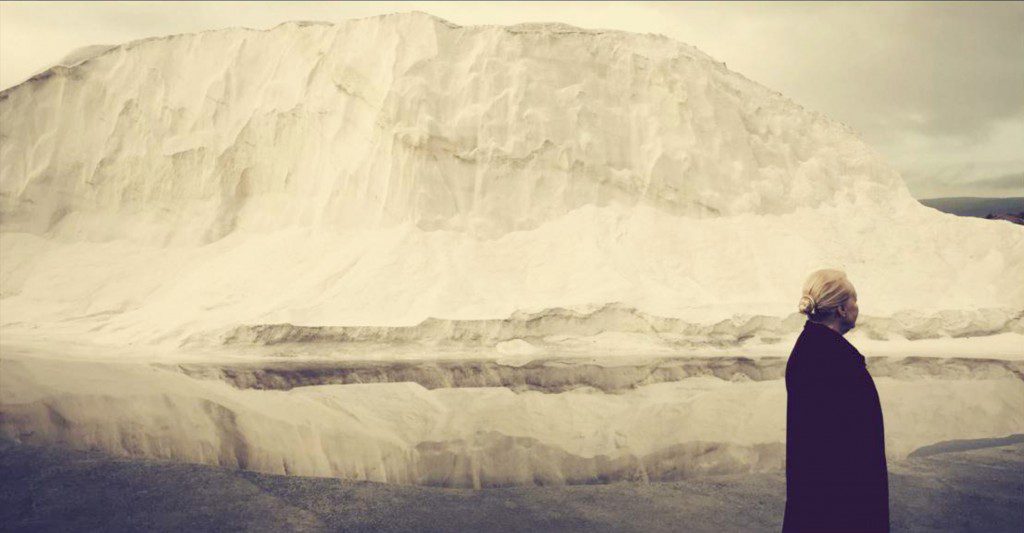 This Sunday, QFT hosts the film, I Am Belfast, Mark Cousins’ love letter to his hometown.

Mark abandoned the city because of its bigotry and violence, but this is his return home.

His deep love of Belfast sweeps us from cityscape to dreamscape and back again as if carried effortlessly on the tide. From salt to sweet.

Belfast herself is our guide. She is a 10,000 year-old woman who is a shawlie for sure, but more Virgilian than An tSean-Bhean Bhocht. Each time we descend into hell and consider the lives lost during our most recent conflict, she walks with us hand-in-hand and back up to the golden light.

Mark compels us to stop and consider these lives, though. The massacres of McGurk’s Bar and Bloody Friday symbolize the loss of thousands and the futility of it all. Our mural – or trompe-l’oeil to give it its proper name – stands out in the narrative. It obviously touched and spoke to the director in a way which we had hoped it would move passersby when we created it. 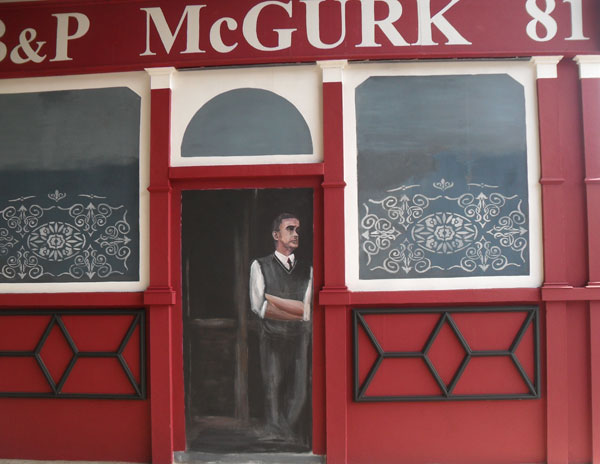 Belfast Film Festival hosted I Am Belfast to much acclaim last year. Little surprise too, when we realise that Mark’s aisling is seen through the lens of master cinematographer, Christopher Doyle, whilst the ever-great David Holmes provides its haunting score.

The directors of the film and the festival were kind enough to offer McGurk’s Bar families a special showing as they knew it would be particularly poignant for us. To say we were moved by the film would be a understatement.

We were similarly touched when the community between St. Patrick’s and the Westlink fought developers and council naysayers to name its street Bealach Mhic Oirc, or McGurk’s Way. I wrote in my book that thanks to this community, “McGurk’s and the memory of McGurk’s will now be woven into the topography of the city. When future generations trace the etymology of the place and attend to its narrative, let us hope they have learned from it.”

Thanks to Mark Cousins our story is woven into the tapestry of his beautiful film and the filmic history of our beautiful city.

I Am Belfast is a sensory journey, a visual treat and a striking mosaic, punctuated – and punctured – by horror. If truth be told and we are to learn from it, we have to attend to it. No matter how uncomfortable this truth may make us feel – and the narrator is apprehensive too – I Am Belfast confronts it. Each time, the film’s poetry and humanity pull us out of the slime.

This is how we should deal with the past – face it full on, without prejudice, and with dignity intact.

In I Am Belfast, the mundane and the everyday-normal are splashed with colour too. So much so that the film may have even softened Samson and Goliath in my mind’s eye. Before, their dominance over the skyline at various vantages throughout the city was a constant reminder of chronic discrimination and small-minded apartheid.

After this film, I also think of them as yellow picture frames or two bright theatre props hovering above the players like dei ex machina.

I Am Belfast reminds us too just how far we traveled. There is hope. The free verse Ballad of Rosie and Maud sings of it.

But as you leave the cinema, bigotry still looms over the city like those cranes and it will be a while before we bury the last bigot we see at the close of the film. In the run-up to elections and another wasteful marching season, take a moment to register this when the usual bigots spew their sectarianism, homophobia and bile.

We have a wee bit to walk yet, but we will get there. We Are Belfast. Salt and sweet.

I Am Belfast at the QFT

2 thoughts on “I Am Belfast”