Press Release: The discovery of a secret British military file proves that a British Army bomb expert and witness at the scene of the McGurk’s Bar Massacre informed British Army Headquarters that the bar was attacked. Subsequent RUC and British Army reports blamed the innocent civilians in the bar.

Author, Ciarán MacAirt, a grandson of one of the 15 civilians murdered in the McGurk’s Bar Massacre on 4th December 1971, targeted the Headquarters Northern Ireland (HQNI) Log for December 1971 (1) which states that the: 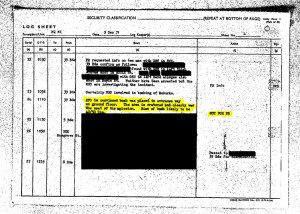 The British state has an 84 year bar on its release although the families have taken the authorities to an independent tribunal in London after fighting for sight of it for nearly 2 years. They are being supported in his battle by leading human rights activists, KRW Law, Rights Watch UK and Julianne Morrison, a Freedom of Information expert from Monckton Chambers.

The independent First Tier Tribunal (FTT) (Information Rights) in London has overseen the release of only a few heavily redacted pages. The rest of the file remains closed pending a hearing before the FTT the tribunal in December, just after the 45th anniversary of the attack. The defendants include the Information Commissioner’s Office and the British Ministry of Defence.

“This is yet another ground-breaking discovery which casts a cold light upon the lies which the police and state manufactured in the aftermath of the bombing. It also demolishes any defence that the police today have in attempting to uphold a disgraceful PSNI Historical Enquiries Team (HET) Review into the explosion which is nothing but another attempt by the police to cover-up the McGurk’s Bar Massacre.”

“It has taken nearly two years to wrest even this snippet from the British state at a time when we are locked in a Judicial Review against the PSNI to quash the Review of the HET. Over a year ago, I alerted the PSNI Chief Constable George Hamilton to this file and demanded that the police access it as crucial evidence in the mass murder of ordinary civilians but he washed his hands of it (2). We are now calling upon that same person to do his job, access the evidence which his investigators missed or ignored, and quash the HET Review.”

“The following section in the British Army file, which was overseen by a police Liaison Officer, noted in capital letters “NOT FOR PR [Public Relations]” so it was not to be made public. As we buried our loved ones, the British state buried the truth, and the police briefed journalists that the bomb exploded whilst in-transit and that it was an IRA own-goal (3). Therefore, the very people who should have defended the basic human rights of our loved ones, instead criminalized them. But the victims’ only crime was their faith.”

“The archival work being undertaken by our client and others is crucial to informing much of the Legacy litigation work we are engaged in in the absence of a human rights compliant mechanism to investigate the Legacy of the Conflict in the North of Ireland. Mr MacAirt’s persistence and his use of the FOIA statutory regime has provided him with a key piece of material in relation to the McGurk’s Bar Bombing 1971. The decision of the ICO to contest the release of this file has now resulted in an appeal to the independent FTT and a venue to argue why disclosure should be made or to justify why the file should remain partially closed.”

–          The pro-state Ulster Volunteer Force bombed McGurk’s Bar on 4th December 1971. Despite all of the evidence that it was a Loyalist attack, the British Security Forces, Government and Intelligence services told the press that it was a Republican bomb-in-transit that exploded inside the bar.

–          15 civilians died in the McGurk’s Bar bombing, including 2 children. 16 civilians, including other children were injured.

–          Ciarán MacAirt is author of the critically acclaimed book on the atrocity, The McGurk’s Bar Bombing: Collusion, Cover-Up and a Campaign for Truth. He also manages the charity, Paper Trail, which helps other families bereaved by the conflict access information in public records.

–          The tribunal is a First-Tier Tribunal (General Regulatory Chamber) hearing information rights appeals. It is due to sit in London on 8/9th December 2016.

–          In this particular legal battle, the families are being supported with the great help of KRW LAW LLP and Rights Watch UK. The team are being advised by Freedom of Information expert, Julianne Morrison, a barrister from Monckton Chambers in London

–          Other legal cases involving the families include a Judicial Review against the PSNI to quash the findings of failed HET report into the bombing; civil litigation against the state for its failure to investigate; and proceedings for a new Inquest.

(2)    The email from the Chief Constable’s representative is dated 16th October 2015 and is reproduced below:

Thank you for your e-mail of 6 October, to which the Chief Constable has asked me to reply on his behalf.

PSNI have exhausted all outstanding lines of inquiry into the McGurk’s bar bombing and there are currently no further investigative steps to be taken.  In the event that further information becomes available in the future which may assist in the investigation of criminal offences related to the bombing, PSNI will ensure that it is investigated fully in accordance with our legal obligations.

I note that you are in the process of seeking release of information held by the National Archives, which appears to relate to attributions of responsibility for the bombing. Legacy Investigation Branch would only be in a position to seek to obtain information from the National Archives within the context of an active criminal investigation, and therefore it is not possible for any steps to be taken to seek to seek access to the information held. I regret that I am unable to offer further assistance at this time.”

“At 8.45 p.m. on Saturday, 4th December, 1971, an explosion occurred at McGurk’s Licensed Premises, 83 Great George’s Street. The charge was estimated at 50 lbs completely demolished the two storey building. Just before the explosion a man entered the licensed premises and left down a suitcase, presumably to be picked up by a known member of the Provisional I.R.A. The bomb was intended for use on other premises. Before the ‘pick-up’ was made the bomb exploded.”