In the coming days the Chief Constable will be forced by the court to hand over a report by the Historical Enquiries Team (HET) which was “completed” nearly a year ago. 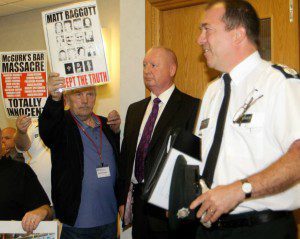 We were forced to take Matt Baggott to court as we considered that his unprecedented suppression of the HET report was irrational, unlawful and a breach of our families’ basic human rights.

It seems we were completely correct.

Nevertheless, I expect little from the HET and its report and not only because the organisation is a failed entity.

Then again, as far as its investigation or review of the McGurk’s Bar bombing is concerned, I have been consistent in my thoughts of the organisation’s failings and it has consistently proved me correct.

It has been left to me and our representatives in the Pat Finucane Centre and Rights Watch UK to source the most salient pieces of archive evidence to facilitate all of the recent investigations. This in itself is an horrific indictment of the organisation. It is also an infringement of basic human rights (1).

I will make it easy for the HET and the Chief Constable again and publish a checklist of what I will be looking for in this, their third report. These are simple questions. They are distilled from years of extensive and intensive personal research but they are simple questions nonetheless. If – or when, no doubt – the HET fail to answer them in a report which is reputed to be over 500 pages long, I will consider that they have failed us once more.

I only hope that my peers – many of whom are aged now – have not dared to hope or place their trust in the HET or this Chief Constable.

This catalogue of denial, error and missed opportunity can never be explained away by the unprofessionalism or gross negligence of a police force, no matter what personal or organizational strains they were under at the time. It cannot excuse the RUC nearly 42 years ago.

Nor will it excuse the Chief Constable or HET today as they will have to account for the failings of their own investigations… and for their treatment of our families.

(1) The Committee for the Administration of Justice, in its scathing report on the Office of the Police Ombudsman in 2011 (CAJ, 2011, p. 22) referenced Jordan v UK 2001, ECHR 327: “Article 2 requirements expressed by the European Court to the effect that ‘the authorities must have taken the reasonable steps available to them to secure the evidence concerning the incident’ and ‘they cannot leave it to the initiative of the next of kin… to take responsibility for the conduct of any investigative procedures’ ”.