The notes of the meeting, discovered by Pat Finucane Centre at Kew National Archives, show in stark terms how the cover-up went right to the top of the political establishment. The British Prime Minister, Edward Heath, initialled the notes in the top corner as proof he read them.

Less than 48 hours after the McGurk’s Bar Massacre, Prime Minister Faulkner advanced the IRA “own-goal” black propaganda and brazenly admitted to political interference in a supposed live RUC investigation. We now know, of course, that the RUC carried out no fair investigation.

“Mr Faulkner said that Mr. McGurk, the proprietor of the pub which was blown up at the weekend, had been interviewed by police in hospital and had said that there were no strangers in the bar on the night of the explosion. The army also discovered that the bomb went off on the ground floor. Both point strongly to the likelihood that the bomb was carried by the IRA rather than Protestant extremists. Mr. Faulkner had asked the RUC to find out whether anything was known about the associations of the people who were killed or injured.” 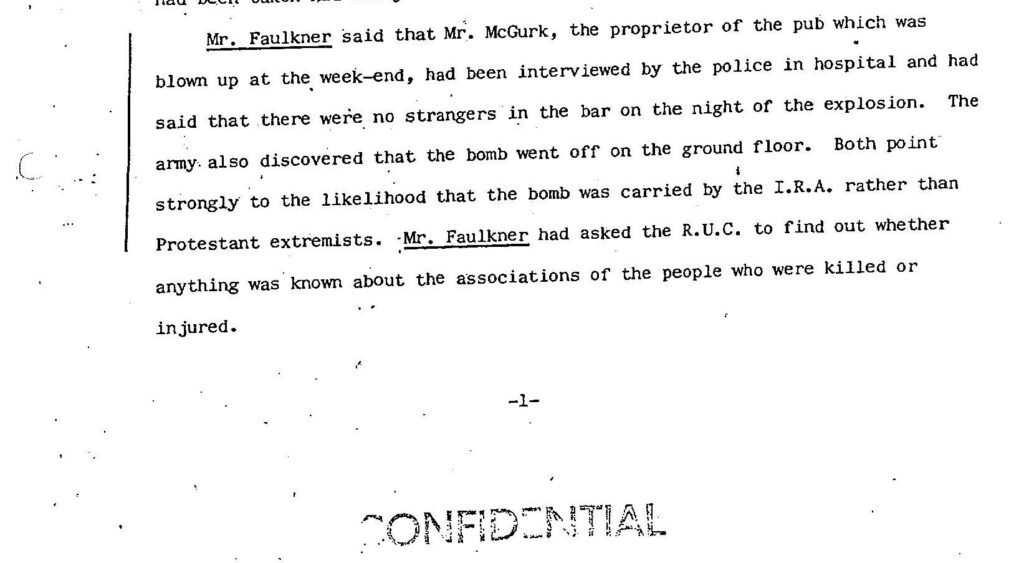 We now know too that the British Army and RUC knew that the bomb had actually been placed in the entranceway outside the bar and that McGurk’s Bar had been attacked and was not the result of a Republican own-goal.

In fact, I traced the genesis of Faulkner’s false information back to within around 4 hours of the McGurk’s Bar explosion. The lies resulted from collusion between Brigadier Frank Kitson, the British Army, and the RUC to push the “line” that the McGurk’s Bar Massacre was the result of a Republican “own-goal”.

I discovered an entry in a high-level British Military 39 Brigade Operations Log recorded at 1am on 5th December 1971 which stated:

There was a lot at stake at this meeting which then went on to discuss internment and the treatment of internees.

Britain and the Northern Irish authorities denied the existence of organised Loyalist violence at this stage, and interned only Irish Catholics. If the British state admitted that Loyalist paramilitaries had just committed the single worst mass murder of civilians since the Nazi Blitz of Belfast, then Protestant/Unionist/Loyalists would have to be interned too.

Nevertheless, British state papers also record that the British Army did not want to fight a war on two fronts so Protestants were not interned until February 1973 and, even then, in comparatively small numbers – amounting to only 5% of internees in six counties which had twice as many Protestants as Catholics in 1971. By February 1973, Loyalists had murdered around 120 civilians and we know that highly discriminatory internment policy was an unmitigated disaster.

But there was a deal to be done between Unionists and the British Government concerning entry into European Economic Community which is ironic considering the recent deals they did for Brexit. Village Magazine reported how the British state covered up the McGurk’s Bar Massacre in exchange for Unionist votes the following month.

Prime Minister Faulkner was also leader of the Ulster Unionist Party which led the sectarian Orange state since partition 50 years before. 50 years later to the day, the UUP is trying to portray itself as the liberal Unionist Party… and failing.

Furthermore, Faulkner and the UUP’s role in the cover-up of the McGurk’s Bar Massacre may go some way to explaining the failure of the Ulster Unionist Party to mark the 50th anniversary of the McGurk’s Bar Massacre which remains the worst loss of civilian life in any single bombing in Belfast. The fact that all of the victims were Irish Catholic may be another reason.

John Taylor was Faulkner’s UUP Minister of State and his bigoted views regarding the McGurk’s Bar victims are too well documented. You can read about some of them here – Baron Kilclooney: Patsy or Liar