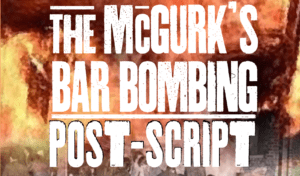 “Among a raft of new information published in The McGurk’s Bar Bombing: Post-Script, I can now prove that there was a covert British Army operation in place on the night of the explosion near McGurk’s Bar and the British Army recorded the escape of the suspect car minutes afterwards. Furthermore, I can also prove that the British state’s lies, which blamed our loved ones for the Massacre, began with collusion between the police and the British Army Commander in charge of Belfast. I name this infamous British soldier.”

“The launch of The McGurk’s Bar Bombing: Post-Script will signal the beginning of legal battles with the Office of the Police Ombudsman, Police Service Northern Ireland and Attorney General if the authorities fail to attend to the new evidence.”

“Historic investigations either failed to find this critical evidence or buried it so we do not know where collusion ends and incompetence begins.”

“The 4th December this year will be the 49th anniversary of the McGurk’s Bar Massacre. Our families demand an independent investigation now.”

”The new evidence in The McGurk’s Bar Bombing: Post-Script is an indictment of the previous historical investigations into the atrocity by the Office of the Police Ombudsman and Historical Enquiries Team. They either missed this vital evidence or buried it.”

“The cover-up continues to this day and the families will be forced back into court to seek an independent investigation nearly half a century after the murder of their loved ones by agents of the British state.”

“The latest findings of Paper Trial exposes yet again the systemic failure of the State to address its investigative obligations under Article 2 of the European Convention.”

“The authorities should be making this sort of information available to families to help them uncover details on how loved ones were killed during the Conflict.”

“Not only do they fail to do so but they actively obstruct through endless bureaucracy and legalisms.”

“We will now assess the impact of these latest significant findings on ongoing legal actions in the High Court.”

Contact Ciarán MacAirt via info@mcgurksbar.com or info@papertrail.pro for further information.

–        The McGurk’s Bar atrocity, 4th December 1971, resulted in the deaths of 15 civilians including two children, Maria McGurk (14) and James Cromie (13). Ciarán MacAirt is a grandson of two of the victims. MacAirt’s grandmother, Kathleen Irvine, was murdered in the attack and his grandfather, John, badly injured.

–        You can access information relating to recent discoveries made by Ciarán MacAirt here:

–        The families are in the middle of court proceedings against the police and the British state including a Judicial Review which the families commenced to force the PSNI to quash a report by the Historical Enquiries Team. The report sought to exonerate the original police investigation.

–        The families are also questioning the Attorney General’s decision to withhold a new inquest.