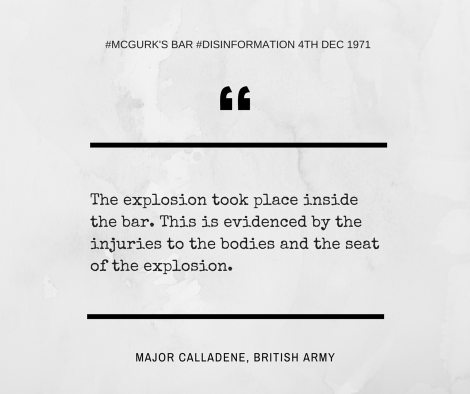 It records that the attending ATOs, Sergeant Crisp and Captain Mendham (2), stipulate that the bomb had been “placed” but could not determine at that stage the exact seat of the explosion (the bomb site was still covered with debris) although we know they had advised their General Officer Commanding that the bomb was “planted outside the pub”.

Significantly, it logs the bomb as a High Explosive (H.E. or commercial explosive) and the possible means of initiating the explosion as “6. S. F.” or Six Second (Burning) Fuse.

This has been completely ignored by the belated investigations because to detonate commercial explosive by this method would mean that it had to be lit. This fact will be highly important to the High Court in September 2015.

The ATOs were correct about the use of high explosive detonated by a burning fuse, so they obviously knew that the chances that it was a bomb-in-transit were non-existent as the fuse had to be lit for the bomb to detonate.

It is plainly ludicrous that a customer in  McGurk’s Bar would deliberately light a bomb in the bar and sit there until it exploded. Major Calladene knew this.

Nevertheless, in his own hand, Major Calladene completes the pro forma by adding his own commentary, writing an “S” for “Senior” where “ATO Opinion” is the typed sub-section. He supplants his own joint writing for the block capitals used for the form-filling previously above this:

The explosion took place inside the bar. This is evidenced by the injuries to the bodies and the seat of the explosion. The political ramifications are considerable.

There was no evidence for such commentary. Major Calladene knew this.

Of the three army experts, only Mendham survives (see footnotes below). I tracked him down (2) but he ignored my attempts to engage with him. He did make himself amenable to questioning by the Historical Enquiries Team but their officers conveniently did not query the significant variance within the log or how he knew that the bomb was indeed lit and planted.

(1) Major Bernard Calladene died in an IRA explosion as he went to examine a car bomb in Wellington Street, central Belfast, on 29th March 1972. He was the most senior officer of the British army’s bomb squad to have died during the war in the north of Ireland.

(2) The unedited ATO report was supplied within the HET’s unpublished Supplementary report (2010). Sergeant R.B. Crisp died in 1979 we were told. Captain Roger Mendham GM rose to the rank of Brigadier, retired from the army in 1998 and in 2010 held a directorate in a global internet technology, information systems and management consultancy. His section is Space and Defence, so his MoD contacts will stand him in good stead when weapon and defence system contracts are being decided.