New evidence from secret British military archives proves that the Fusiliers regiment which helped dig for survivors in the rubble of McGurk’s Bar, reported intelligence within minutes of the explosion to its Headquarters at odds with the subsequent lies spun by the British armed forces.

“Owner of pub a moderate RC [Roman Catholic] unlikely to have allowed people to use it as a mtg [meeting] place. Bar close to Gem Bar which is a [REDACTED].”

Subsequent disinformation by the British Army and Royal Ulster Constabulary (RUC) alleged that the family-run pub was a meeting place between an Irish Republican bomb-maker and bomb planter, and that the bomb was destined for another target when it exploded prematurely. These were lies.

Mr. McGurk’s wife, only daughter and brother-in-law were among the fifteen civilians murdered that night. He also lost his livelihood and home in the UVF attack. His sons survived and are named in the log.

2 RRF transmitted its report to Brigade Headquarters as its soldiers still helped hundreds of New Lodge residents dig for survivors. 2 RRF also referred to the original target of the bombers, the Gem Bar, which was recorded as an Official IRA Headquarters in 2 RRF Battalion logs. 2 RRF raided the Gem Bar two nights before the UVF targeted it and arrested six customers for questioning.

Subsequent historical investigations by the likes of Office of Police Ombudsman and Historical Enquiries Team erroneously told the families that the British Army and RUC had not connected the Gem Bar as a target.

Nevertheless, three and a half hours later at 0100 hours (1:00 am) 5th December 1971, the Brigade Commander of 39 Brigade, Brigadier Frank Kitson, informed his Brigade staff:

“RUC have a line that the bomb in the pub was a bomb designed to be used elsewhere, left in the pub to be picked up by the Provisional IRA. Bomb went off and was a mistake. RUC press office have a line on it – NI should deal with them.”

The following morning at 11:10 am, 39 Brigade Headquarters reported to British Army Headquarters Northern Ireland as it had its own Ammunition Technical Officer (ATO) – a bomb disposal expert – at the scene. Kitson’s 39 Brigade informed HQNI:

“ATO is convinced bomb was placed in the entrance way on the ground floor. The area is cratered and clearly was the seat of the explosion.”

The ATO’s expert opinion supported the witness testimony of a paperboy who saw a Loyalist bomber plant the bomb in this entrance way. Brigadier Kitson and the British Army knew that McGurk’s Bar was attacked and that it was not an IRA ‘own-goal’.

The bar owner’s son, also called Patrick, is named in the log among the survivors. He said of the new evidence:

“My father was indeed, in the words of the 2 RRF Intelligence report, ‘a moderate Roman Catholic’ who was not the sort of man who would have allowed a bomb to have been prepared or transited on his premises.”

“We now know too that a British Army bomb disposal expert informed Army Headquarters the following morning that the seat of the explosion was clearly in the outside hallway.”

“Such damning evidence proves that the truth did not matter to the RUC, the British Army or the British Government.  They all willingly conspired to twist the McGurk’s Bar narrative to suit their own narrow political agenda. Instead of searching for the Loyalist culprits, they all created the grievous fiction that only Catholics were responsible for violence in NI in the early 1970s and that McGurk’s Bar had been an IRA ‘own goal’.”

Ciarán MacAirt is a grandson of two McGurk’s Bar victims and has been fighting for the release of the new evidence. He said:

“It has taken four years to get the Ministry of Defence to release this evidence although the reference to the Gem Bar is still redacted by the British authorities due to ‘unsubstantiated intelligence’. This is despite the fact that I gave information to the authorities which proves that the British military considered the Gem Bar a target, and the Gem Bar is long gone.”

“This secret British military file still proves that the British Army reported within minutes that it did not believe that McGurk’s Bar was an IRA bar, but then created the lie that it was, and buried all evidence that proved that Loyalists attacked the bar.” 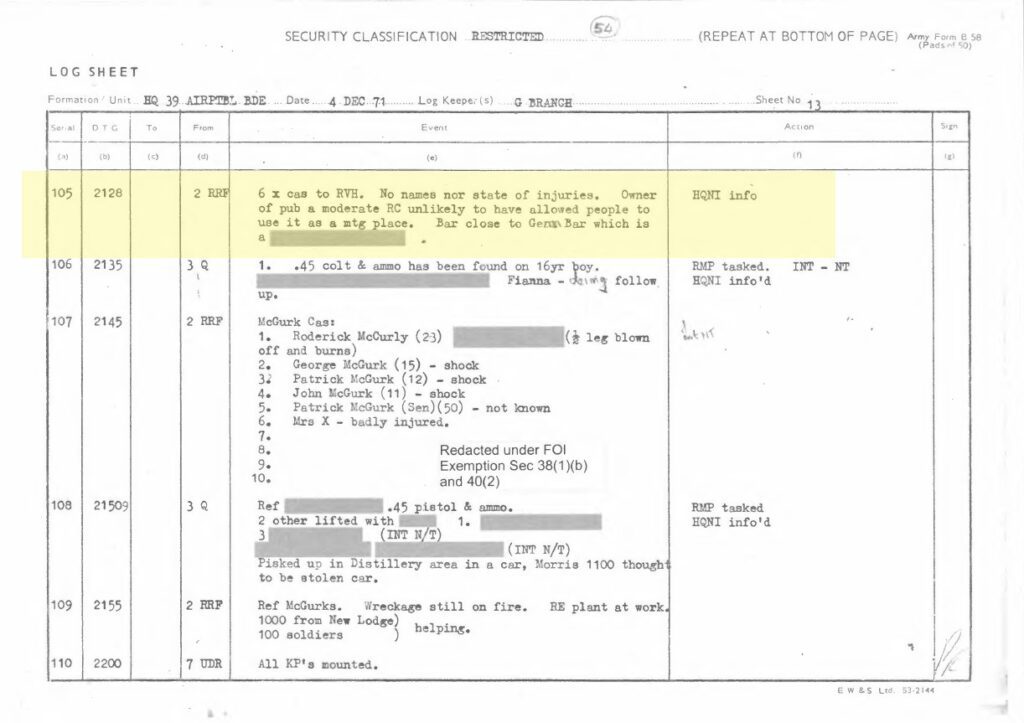