Facing the Questions of the Past

Families of those murdered in the 1971 McGurk’s Bar bombing are to ask the PSNI Chief Constable George Hamilton for a meeting following the debate held in St Mary’s College on Thursday 6th August, as part of Féile an Phobail. 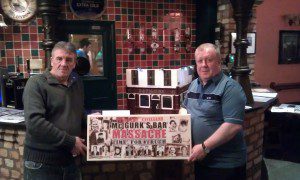 “It is very important we meet the Chief Constable after the debate in St Mary’s. His comments that he does not want to ‘defend the indefensible’ were very timely. If he truly means that then he can back up his words by actions. Specifically he can stop fighting the McGurk’s Bar families in the Courts.

“The background is this. In February 2011 the former PSNI Chief Constable, Matt Baggott refused to accept the findings of the Police Ombudsman that there had been an “INVESTIGATIVE BIAS” on the part of the RUC in dealing with the McGurk’s Bar atrocity. Instead the Chief Constable allowed the Historical Enquiries team to publish a Report rubbishing the findings of the Police Ombudsman.

“Since 2011 our families have been in Court to overturn the HET Report that tried to say that the RUC did nothing wrong in our case in 1971. But it is the barristers for the current Chief Constable George Hamilton who are opposing us in the High Court.

“Our meeting with the Chief Constable is to clear up the uncertainty. Is he part of the new PSNI police Service or still part of the old RUC corporate memory unwilling to admit past wrongs? The truth will become clear on 25 September when the McGurk’s Bar families are due back in Court.”

You can hear Robert questioning Chief Constable Hamilton in this video of the event (from 46 mins 32 and following).