Another Year… And We Are Still Waiting

ESTRAGON: (having tried in vain to work it out). I’m tired! (Pause.) Let’s go.
VLADIMIR: We can’t.
ESTRAGON: Why not?
VLADIMIR: We’re waiting for Godot. 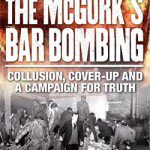 This time last year we launched our book at the historic Clifton House on North Queen Street which is just down the road from where McGurk’s Bar once stood. Yet another anniversary was weeks away.

The year before, we had memorialized the spot where 15 of our family members were murdered with an innovative mural-relief. A decade before that, we placed a beautiful Celtic cross on the hallowed ground and a decade before that, on the twentieth anniversary of the atrocity, the families gathered to unveil a marble memorial with each of the 15 names… men, women and children.

The 42nd anniversary of the massacre is now upon us but still we have to fight tooth and nail for even a scrap of truth from the authorities even though we are supposed to be living in a changed society and are policed by a reformed service. This past year has been no different from any other since the bomb exploded on 4th December 1971. 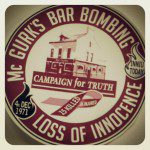 As well as being very busy engaging with readers across the two islands, including politicians at events in Stormont and Westminster, we also launched our film, The McGurk’s Bar Bombing: Loss of Innocence.

Cinema premieres and events around the country were capped with an invitation to present our story at Féile an Phobail, Belfast’s best known cultural and art festival. There was standing room only and a hushed room as the film flickered against the wall.

Nevertheless, these events, all of which were supported by ordinary families from many other campaigns, were much more than simply promoting significant campaign tools which we had created. Their combined importance is that they raised public awareness of the horrific fact that our families are still waiting for a semblance of truth, even today. 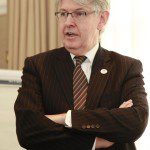 Last year, two days after the 41st anniversary and after we had engaged politicians in Stormont and Westminster, a British Member of Parliament, Michael Connarty (right), demanded in the House of Commons that Britain’s Prime Minister apologise to the families of the McGurk’s Bar victims and order a “proper investigation”. This was a personal demand too as Michael lost his uncle Philip Garry in the McGurk’s Bar bombing.

By that day, we had been waiting for the Historical Enquiries Team (HET) to complete their review of the bombing for over six and a half years. That was also nearly two years after the Chief Constable of Police Service Northern Ireland, who is responsible for the HET, denied that there was anything wrong with the original police investigation into the bombing and that there were no more “investigative opportunities”. This was a denial of the then Police Ombudsman’s finding that the police were guilty of “investigative bias” when they, in effect, criminalized our families instead of investigating the real culprits – pro-state Loyalists.

A few hours after Michael’s demand to the British Prime Minister, the HET – without consultation with the families – announced that they had now completed their review of the McGurk’s Bar massacre. How coincidental.

Nevertheless, nearly a year later, and with the 42nd anniversary of the atrocity upon us, we are still waiting to see that HET report, for its release has been blocked by the Chief Constable of the reformed Police Service of Northern Ireland (PSNI). Without rational or substantive reasoning, Chief Constable Matt Baggott has stopped our families from receiving the report without so much as a thought for how he has re-traumatized them. Most of them are aged now and have been campaigning constitutionally and with great dignity for two generations but my peers continue to have their basic human rights violated by the state.

Complaints and a Judicial Review 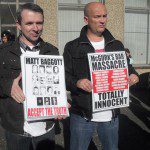 We kept our local political representatives up-to-date with the on-going intransigence of the police and raised concerns with the Policing Board regarding non-compliance of Article 2 of the European Convention of Human Rights. But, after waiting patiently for engagement from the PSNI, never mind the HET’s completed report, we were eventually forced, much to our dismay, to complain officially to the Policing Board and the Police Ombudsman again. We then had to begin proceedings for a Judicial Review of the Chief Constable’s refusal to release the HET report. This has been working its way through the courts and will be heard this Tuesday and it looks like the police will be forced to hand over the report in some form.

Meanwhile, the HET has been discredited and Amnesty International has wheeled in behind us and other families to slam the state’s failure to deal with the past. We have submitted a paper to the Panel of Parties but are still waiting on the Criminal Justice Inspection to report on the suspect relationship between the PSNI and the statutory body that was set up to hold police past and present accountable for their grave failings.

It has been a busy year for the campaign because we are still waiting for a semblance of truth within a police review without expecting much from it. For those those who have had ultimate responsibility to complete the review have been part and parcel of its suppression. Waiting for Godot indeed…

But horrific as well.

1 thought on “Another Year… And We Are Still Waiting”