Families of those murdered in the McGurk’s Bar atrocity travelled to London this week to mark the 44th anniversary of the attack and to lobby for the release of archives which relate to the attack but which have been closed to them because of what the authorities deem to be “national security”.

15 innocent men women and children lost their lives in the no-warning bomb attack which was carried out by pro-state extremists of the Ulster Volunteer Force.

Gerard Keenan lost both parents in the bombing. He said:

“Within 12 hours the Royal Ulster Constabulary created the lie that the McGurk’s Bar bombing was an IRA own-goal. We know this as we have the police documents to prove it. Despite all of the evidence, the police criminalized the innocent victims of the massacre rather than investigating the pro-state terrorists who planted the bomb. This lie was then spread throughout the British government and military before being churned out to the media.

Again we have the archive proof from Britain’s secret files, but unfortunately we had to find this evidence ourselves.

Our families are campaigning for documents about the McGurk’s Bar bombing and subsequent cover-up to be made public.  Instead the British are hiding behind “National Security”. It is now a weapon to deny us the truth about McGurk’s Bar.  We are travelling to London which is the epicentre of the conspiracy to pervert the course of justice in this and other legacy cases.

London holds the Key. The key to the documents in Whitehall, the Public Records of Office and National Archives.  The key to unlock the truth about McGurk’s Bar attack and cover-up.

In London, we will lobby Members of Parliament and the House of Lords as well as the legal fraternity.”

Author Ciarán MacAirt (below right) whose grandmother Kathleen Irvine was killed in the McGurk’s Bar attack has spoken of on-going attempts to bar him from accessing information. 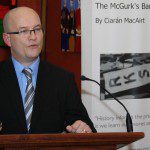 In 2010 I discovered records of a Joint Security Committee meeting between the Chief Constable of the RUC, the General Officer Commanding British Forces in the north and the Northern Ireland Prime Minister, Brian Faulkner in the wake of the McGurk’s Bar bombing.

Before I could access it, a national security bar was slapped on it which meant that it was sealed – one of several I have picked up over the last few years of research.

Only after I kicked up a stink with the former Police Ombudsman and the failed Historical Enquiries Team, was a quoted reference to the murder of my grandmother and the 14 other victims released in the Police Ombudsman’s report.

The document proved that the Chief Constable and his head of Special Branch had misinformed government and the head of the British Army in the north that the McGurk’s Bar bombing was an IRA own-goal. They went even further with the lie and criminalized the innocent victims:

The former Police Ombudsman described this as ‘critical’ evidence for his investigation and yet we would never have been allowed to know of the meeting’s existence because of ‘national security’.

Nevertheless, within the last few days the Police Service of Northern Ireland has denied my request to access a copy of this file (and every other request for information I have made over the last few months). So to this very day, I am denied access to a copy of the minutes of the meeting which I discovered and which proved the head of the police was making up lies about our loved ones.

Instead we are expected to take the word of today’s police that this is the only reference that the Chief Constable of the RUC and Head of Special Branch made about my grandmother and the other victims.

Unfortunately, a cabal within PSNI has proved time and time again that it is more concerned about upholding the reputation of the RUC than truth and justice for families who lost loved ones during the conflict.

We are certain that British attempts to stop us accessing information about the murder of our loved ones 44 years ago have less to do with National Security than National Shame as the archives expose how the British state colluded with its loyalist forces in the murder of citizens and covered up atrocity after atrocity”.