Written and directed by Fabienne Lips-Dumas, Game of Truth features families searching for truth (Ar Lorg Na Fírinne) about the death of their loved ones during the conflict.

The story of the McGurk's Bar Massacre is one of five stories told by families from across the community.

The other stories include the Shankill Road Bombing, Stake Knife, the agent in the Irish Republican Army working for the British state, and the state-sanctioned murder of human rights lawyer, Pat Finucane; and the killing of Raymond McCord Jr.

Colin was working as an Information Adviser in Headquarters Northern Ireland when reports of the McGurk's Bar Massacre were recorded and buried. He also worked with the various information units such as the Information Policy Unit, British Army Public Relations, and the covert Information Research Department.

Ar Lorg na Fírinne also features Joseph McClory, the young hero in 1971 who saved the life of a passerby and told the unflinching truth about the attack on McGurk's Bar.

We will be examining some of the British military files which led us back to a dirty, secret agreement between Brigadier Frank Kitson and the RUC to blame our loved ones for the attack.

Game of Truth was filmed (under strict regulations) during the global pandemic and it is only through the great effort of Fabienne, her production team, and funders that this important documentary will air. Fabienne has been working on it for many years before Covid-19 too. 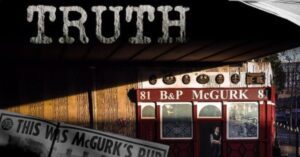